Hey friends!
Welcome back to the blog! Today I’ll be giving you my thoughts on the 40mm Grenade Holster from Deadly Customs. There are SO many different carrying options for airsoft impact grenades on the market right now from traditional 40mm pouches to lightweight Kydex holsters so it can be pretty overwhelming to choose a carrying system that works for you. I personally prefer Kydex holsters to traditional fabric pouches for their durability and also retention. Deadly Customs is a relatively new company on the scene so I figured it was time to try out their products. 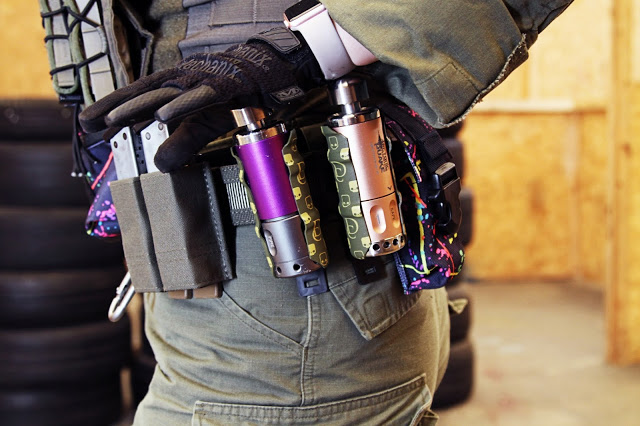 The 40mm Grenade Holster from Deadly Customs is a Kydex carrying system that has been designed specifically for airsoft impacts that is compatible with any MOLLE system. Although there’s really not a great deal to talk about in terms of features as they are a super simple bit of kit – just moulded thermoplastic with an attachment system, this simply means there’s less to go wrong. One of the main selling points of Kydex carriers is that they are really lightweight so are perfect for low drag loadouts.
They can be attached to a plate carrier or belt with either a malice clip or combat loop (which are compatible with any MOLLE system) that you select at the point of ordering. For all of my 40mm grenade holsters from DC I have opted for the malice clip (out of habit mostly). I like the malice clips because they’re easy to attach/detach when needs be and they’re also secure. Although you can attach them to any MOLLE system, I prefer to have mine on my belt set-up. The holsters allow them to be within easy reach so the deployment of them is smooth when needs be. They’re also easy to reindex.
The 40mm grenade holster from Deadly Customs fits all of the following: all versions of the Tectonic Innovations Quake Grenades, the Tectonic Innovations Neutron, TRMR, Alphatec Grenades, Pulse Armament B1 Grenades, EG WP40 Smoke Grenades, TAG Rounds and the Oshiboom Grenades (however as the Oshibooms are a little smaller than the other 40mm grenades on this list Deadly Customs recommends a few wraps of tape around the grenade to make it fit more securely)
The holsters are available in Black, Olive Drab Green, Coyote Brown and the Deadly Cus-Tom graphic print (for those that want something a little different). They all retail for £16.99 from the Deadly Customs website (where you can use my discount code ‘femmefatale’ to save 10% on your entire order) or you can also find them at stockists such as Extreme Airsoft, High Pressure Airsoft and Fire Support.
Post sponsored by Deadly Customs
Use code ‘femmefatale’ for 10% off your entire order at www.deadlycustoms.co.uk
A Special thanks to Femme Fatale for this review please visit her blog for more reviews here Femme Fatale